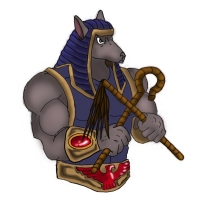 Anubis was part of the ancient Egyptian Pantheon, which guided and guarded the dead. Most of the gods left when the Egyptian civilization collapsed but Anubis stayed behind. He did freelance work for other gods until he met up with the other members of The Cosmic.