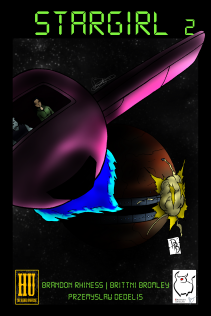 Far into the future the human race no longer lives on the Earth. They live in a giant, orbiting, ring-shaped space station with a population of half a billion.

A Carangian military government ship has arrived at Earth. The humans and the Carangians have been at odds for a long time and a major summit was set for the coming Monday.

The Earth’s Prime Minister and his staff are now dealing with this situation.

Meanwhile, teenager Lasha Trinity is angry that her boyfriend, Kyle Evermore, has left the Earth with his parents to go to the planet Concord to deal with his father’s business.

For her birthday, Lasha received a new, pink spaceship from her Uncle Gary. Angry that Kyle isn’t around to take it for a drive, Lasha decides to take her stepdad’s dog Rover with her.

They take a drive to the moon and decide to go into a bar. Things take a turn for the worse when Rover goes to the bathroom and two creepy guys approach Lasha. All signs indicate that they don’t have good intentions towards her.

Submit your reviews of Stargirl #2 to fanreviews@thehigheruniverse.com.