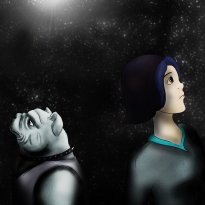 Tell us what you think!

Have you read Stargirl #1? Send your thoughts, comments, prayers, or threats to fanreviews@thehigheruniverse.com. Be sure to include your name, where you’re from, and write “okay to print” in the subject line.

Both me and my wifey have read Stargirl #1 and we both enjoyed it. The characters are relatable. It’s kinda slow moving though, but I’m sure it will pick up.

The story about folks having to live in space because earth is uninhabitable is cool. The art is good and the story has such room for growth. I like it.

Rover’s expressions are the best! When Lasha says “your safety is in my hands” — and he’s like “err”

Uncle Gary is great! He could be his own comic.

I like how Lasha thinks she can handle anything. She thinks she always remembers everything.

I don’t think the Carangians plan on being friendly…

I really enjoyed the layout of the comic. It’s obvious that there’s some talent behind putting the book together.

The overarching storyline held my interest and I especially like the Rover character. He reminds me of something out of “Starship Troopers”…the novel. His relationship with Lasha is probably my favourite part of the story.

You can just tell that Rover’s master is going to die horribly (indeed probably everyone on Earth). One note about their relationship; I think it might be more effective if you let him make outlandish comments without him apologizing for anything. Perhaps he has to be polite to his Master but with anyone else it’s no holds barred. I like that aspect of their relationship so I’d keep it but he’s a dog man. Let him be a little dirty. No one else in the book is really grimy and I think it adds to the universe.