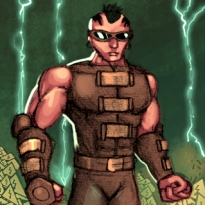 Mick Peterson grew up in a middle-class family in a small town in Washington State. As an adolescent he discovered he had the power to shoot electricity and to electrify his body. He kept it a secret until one day at school when a bully held his head underwater in the school fountain. Mick unconsciously lashed out and used his electricity to fry the bully. Because of this he was expelled from the school.

When his parents found out about his powers they figured it was some sort of a sign and enrolled him in a trade school for electricians. Mick had a steady girlfriend named Jen at the time and he went to college to be an electrician.

Mick had always liked superheroes and dreamed of being one. He eventually decided to quit college after his first year, break up with Jen and move to New Edmonton City.

Although this was against the wishes of his parents they still supported him. Mick decided to name himself Powerage.

While in line to apply for his license Mick ran into Deathhammer and Demonman who were in line with him. They explained that they were starting a team and needed members. Mick decided to join them.

He has become a valued member of the Misfits and gravitated towards Deathhammer because he admired his leadership and warrior mentality.