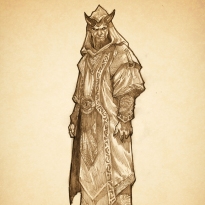 Moses is a mysterious wanderer who possesses near infinite wisdom. The other members of The Cosmic gravitated towards Moses during what has become known as “The Invasion”. Little is known about the Invasion. All that is known is that the Earth came under attack from an extraterrestrial force and The Cosmic joined forces to stop it. Since that time they have remained together as a team. Moses is their leader.