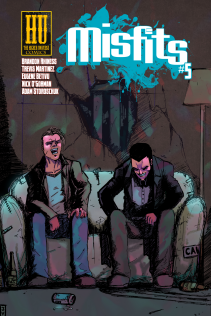 The Misfits fail miserably trying to capture a super-criminal in the street.

Later, after finding rival hero Captain Uniteus in a compromising situation, the Misfits expose him in the media. Everything will be fine, as long as Uniteus doesn’t come looking for revenge.

Demonman, meanwhile, is still putting on the charade that he’s wealthy in order to impress his girlfriend. But the deception is wearing thin.

Grindcore and Telex are partying together quite often. On this particular night, at a hero house-party, they get high on mushrooms. It doesn’t end well.

Submit your reviews of Misfits #5 to fanreviews@thehigheruniverse.com.