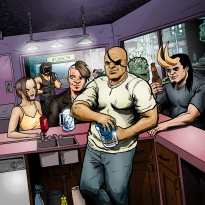 Tell us what you think!

Have you read Misfits #1? Send your thoughts, comments, prayers, or threats to fanreviews@thehigheruniverse.com. Be sure to include your name, where you’re from, and write “okay to print” in the subject line.

I’ve just read Misfits and I love it!

I think it’s better than Ghoul Squad. I see a certain parallelism between them (a group of monsters that have to fight against an evil one). I think the point of the story is the way you tell the action: day by day in the life of these guys.

I love the junkie gorilla and Demonman!

I like the storyline of Misfits. Funny thing is…it’s very relatable.

I have to say I think Misfits has the potential to go far.

In terms of artwork, I thought that the page with the gorilla growing in size was outstanding. I thought the writing in general was very well done and I never found myself losing interest in what was going on. There is a lot of dialogue with characters sitting around and for it to hold my attention for the entire issue really says something about the quality of writing.

I just read Misfits #1. I love it! It’s easy to roll your eyes when you hear about ANOTHER deconstructionist, adult take on super heroes. It’s been done so many times, and done well so many times that it’s hard to believe there’s new ground to tread. You managed to tell a straight-up super story, and be able to tie it in seamlessly with a weird fish-out-of-water story, without it coming off as spoof or parody. It feels like a more personal superhero story.

I honestly had never really heard of serious indie comics and I bought your comic and it’s fucking pro. I’ll def be getting the next one when it comes out! It kinda reminds me of The Watchmen in that the supers have licenses and are paid, and some choose not to take that path so it adds a very human struggle to Demonman’s life. Diggin it!

I got the first issue from a dude named Adam on the LRT. He asked if anyone wanted to buy his comic and I didn’t have any money with me but I traded him my CD for the comic and I gotta say it was pretty awesome!! You guys have done an epic job and I hope to read the 2nd issue and see where things go. It’s great to see and read comics coming out of Edmonton. I love that I could see the Edmonton library and hopefully you’ll have more land marks that us Edmontonians can identify! Great work and keep it up!!!

Misfits 1 is great, man. Good story and art. I like Demonman a lot, and I like the mix of comedy and action. I can’t wait to read the second issue.