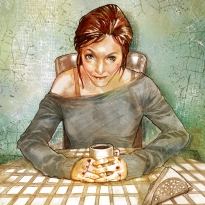 Mental Case is a web series created by Brandon Rhiness and Afton Rentz.

It’s about Elya Virk, a psychotic young woman with a propensity for fighting.

The series is written and directed by Brandon Rhiness and stars professional fight director and actor Afton Rentz as Elya.

It had been years since I’d done any movie-related work because I’d been working so hard on the comic books. But I missed making movies, so I decided to get involved again and try to get a project off the ground.

I began attending the Edmonton Filmmakers Group meetings and one day Afton Rentz came to one. She introduced herself and said she’s an actor and fight director and she loves to fight in movies. She was looking for people to make movies with. Movies with lots of fighting.

I can’t believe nobody else saw the huge opportunity in this. I sure did. I spent the next couple of days thinking of a story. Then I emailed Afton and told her about my idea. I didn’t have all the details nailed down, but I wanted the project to be about a crazy woman who fights a lot.

Apparently Afton agreed that this would make a great web series. We met and fleshed out a cool story. We decided to do it as a web series where the main character (played by Afton) would get in a big fight in each episode. We settled on the title “Mental Case.”