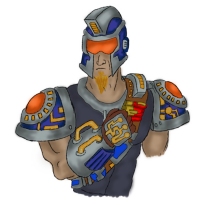 Hephaestus is the forger of the Greek Pantheon. He has unparalleled knowledge of technology. He took the name “Vulcan” during the so-called “Roman Revival”. He acquired Helios’ chariot after Helios left. Hephaestus adapted the vessel for internal propulsion instead of Helios’ steeds. The vessel uses an unknown combination of mechanical and biological engines for mobility. After the Invasion this vessel became the home for The Cosmic. It is now called The Argo.