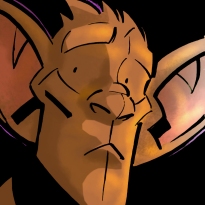 Base of Operations Transylvania

Vitor Branco was a university student in Brazil. His father was into black magic and would conduct experiments on Vitor. One day Vitor’s father used his magic to turn Vitor into a bat.

However Vitor’s father was heavily involved in the drug trade and on the day Vitor was turned into a bat police raided his house and his father was killed in a gunfight. Vitor flew out the window and never returned. There was no way to turn Vitor back into a human.

Vitor lived in the mountains by himself for a few years until Varney the Vampire found him. Varney offered him a spot on The Ghoul Squad, the team of monsters Varney was putting together. Vitor accepted.

Vitor was always a good student and loved researching and learning new things. He continued his studies after becoming a member of the Ghoul Squad and aside from Varney, who has gained his knowledge from being alive for many centuries, is the most intelligent member of the team.

Varney named Vitor Hellbat. Vitor still prefers his human name. He currently resides in a castle in Transylvania with the other members of the Ghoul Squad.