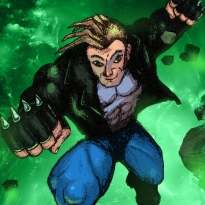 Burke Cassidy was born in New Edmonton City. His father left the family when he was still a baby and Burke has never met him. When Burke was six years old his mother died of a drug overdose and Burke was taken to live with a foster family since he had no other known relatives.

As Burke aged into his teens he began hanging around with a bad crowd. He started getting involved in selling drugs and other petty crime. Burke was always arguing with his foster parents who were becoming concerned with Burke’s partying ways. After Burke was arrested for drug possession and when they found out that Burke dropped out of High School, his foster parents sent him to a reform school for troubled teenagers.

There Burke became friends with his bunkmate Donovan Harper who was an aspiring drummer who was in a band called Trauma. Donovan also had a power that allowed him to feel less pain the angrier or more distressed he was.

After spending a year in the reform school Burke’s foster parents took him back. They tried to convince him to go back to high school but he refused. Since Burke seemed to be off the drugs and got a job they didn’t force him to go back.

Burke kept in contact with Donovan and the two began hanging out in the city. Burke began to turn back to his old ways and the two of them got into increasingly more trouble.

After returning home after a night of partying Burke fell asleep with a lit cigarette and caused a fire in his foster parents’ house that caused a lot of damage. Having had enough of him, the foster parents kicked the 16-year-old out of the house.

By this time Burke had a girlfriend named Angel. She and Burke, along with Donovan began living wherever they could and they became more and more involved in drugs.

It was during this time that Burke discovered he had the power to generate earthquakes and seismic blasts. Since both he and Donovan had powers they both began discussing the possibility of becoming licensed heroes when they were old enough. Burke thought of naming himself either “Grindcore”, “Napalm”, or “Pitbull”. Donovan decided he would call himself by his old band’s name “Trauma”.

One night while she was out on her own, Burke’s girlfriend, Angel was raped by a couple of drug dealers that Burke knew. Burke and Donovan tracked them down and severely beat both of them. One of them died in hospital. Burke and Donovan were arrested for murder.

Since he was 18 at the time, Donovan was charged as an adult and got 5 years in prison. Burke was still 17 so he only got two years in a youth jail. Although they served their time in different facilities, Burke and Donovan stayed in touch by writing each other. Donovan said that he could no longer follow his plans to become a licensed hero because he’d have a criminal record. Even though Burke would be 19 when he got out of jail he would not have a criminal record because he was only 17 at the time of his arrest.

Burke tried writing Angel from jail but the letters were all returned because she had moved and he didn’t know where she was living. Burke later found out that she had killed herself.

One of the conditions of Burke’s release from prison was that he had to finish high school. After his release he never heard from Donovan again. The last he heard was that Donovan was out working on some off-shore oil rig.

Nineteen years old and out of jail with a clean record, Burke began to perfect his seismic abilities. He also began reading up on all the requirements to get your hero license. He went for his test and passed it on the first try. He then got his license under the name “Grindcore” and began looking around for a team to join.

One day, while checking out the bulletin board in the hero licensing office he saw an ad for three guys looking for a fourth member to form their team. Burke called the number on the ad and set up a meeting.

He showed up for the meeting and met the heroes Deathhammer, Demonman, and Powerage. He introduced himself as Grindcore and showed them his powers. They were impressed.

A couple of days later Burke got a call from Deathhammer, the team leader. He got accepted to the team. Before they could register their team they had to come up with a name. After discussing many possibilities Burke offered the name “Misfits” after one of his favourite bands. The other guys didn’t like it all that much but since they couldn’t think of anything else they decided to go with it. They could always change it later if they wanted.

Grindcore didn’t go back to his old ways but he still smokes marijuana (something Deathhammer only slightly tolerates). And he likes his beer.