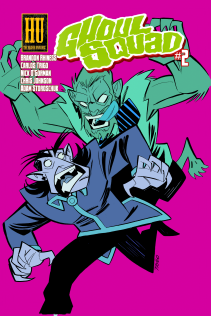 Varney the Vampire has gathered an assortment of “monsters” and set up shop in a castle in Transylvania. His plan is to combat supernatural evil in the region (and make a fortune doing so).

The so-called “monsters” he convinced to join him do not share Varney’s enthusiasm, but as long as there’s a paycheck involved, they’ll go along for the ride.

In their first outing they nearly managed to capture a werewolf. However, the werewolf escaped, leading the Ghoul Squad to return to the castle to formulate a new plan.

Little do they realize that the werewolf is following them back to the castle.