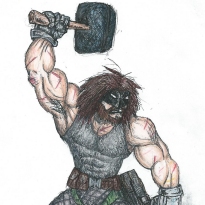 Jake Thorschuk was born and raised in the Rocky Mountains in British Columbia, Canada.

Jake was the youngest of five siblings and lived in a cabin deep in the forest with his parents. They lived off the land and made moonshine to make a living. Their father taught them hunting, survival and combat skills. Jake and his brothers and sisters spent nearly all their young lives working hard and learning to become what their father described as a “great warrior”.

Jake idolized his oldest brother Gordon. Gordon would always talk about his goal in life: to become a superhero.

One of the skills the kids learned from their father was to build a variety of weapons. Gordon would always make swords and called himself “Deathsword”. Jake, who wanted to emulate his brother made a hammer to use as a weapon. Jake always liked the god Thor. Jake wanted to call himself “Deathhammer”. Gordon ridiculed Jake, telling him that a hammer wasn’t a real weapon.

When they got older Gordon became more distant and angry. The rest of the family didn’t know but Gordon would sneak off and hang around with a group of people in the forest who were very cult-like.

One day while Jake was out chopping wood Gordon killed his entire family. Jake came home to find their bodies. Gordon was waiting for him. They fought, Jake using his hammer and Gordon using his sword. Jake killed Gordon. Then he buried him and the rest of the family.

Jake lived by himself for many years afterwards. After a while he began venturing to nearby towns. One night, after getting drunk on whiskey and passing out he accidentally burned his cabin down by setting fire to the moonshine-making equipment.

Realizing there was nothing left for him Jake made a drastic move and packed his few belongings and moved to New Edmonton City with the goal of becoming a superhero.

On his first day in New Edmonton Jake ran into Demonman who had just arrived on Earth from hell. After nearly engaging in battle the two became friends and Jake convinced Demonman to come get a superhero license with him.

When filling out his application Jake used the name “Deathhammer”.

After reviewing his application, the hero council asked Deathhammer if he would be interested in applying for his leadership license. This would mean that Deathhammer could form his own superhero team. The hero council was desperate for new teams. Deathhammer tried out and passed the tests.

This lead to Deathhammer founding the superhero team The Misfits.