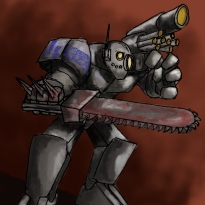 Buzzkill is a robot that was invented by Cote Reilly. Reilly’s first robot was killed by the Misfits and has since been named “Demented Robot”. This robot escaped Reilly’s shop when Reilly first turned it on. It ran amok through the city. Some kids spray-painted “Demented Robot” on him before the Misfits destroyed him.

Reilly had been under the eye of the super hero council for quite a while due to his borderline illegal inventions. The incident with the Demented Robot gave the council reason to raid his home and arrest Reilly. They confiscated all his equipment and inventions. Buzzkill was one of the inventions. Buzzkill is a robot that, at this period in time, can only be remotely controlled. He cannot think for himself.

After Reilly served some jail time and paid a large fine he was released and the Buzzkill robot was returned to him. It now sits in Reilly’s shop. Reilly still dreams of finding a way to make Buzzkill conscious and servile.