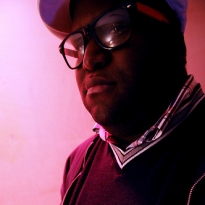 Brandon Robinson is a professional artist from the San Francisco Bay Area. His interest in the arts began at the age of four when he fell in love with animation and comic strips. He knew then that he would focus his life on cartooning and he continued on that path through high school.

His first illustration work began in high school while working for Fighting Back Partnership as youth illustrator. He created cartoons for the Vallejo Times Herald, flyers, and murals while working for the non-profit organization. He would also create artwork for Punk Bands in his local scene. He soon attended the Academy of Art University of San Francisco, where he graduated in 2007. He worked as an Animator and freelance Illustrator on two animated videos (Preschool Prep Co.’s “Meet the shapes, Meet the colors”), commercials (Academy of Art Univ. Epidemic Film Festival), publications (Baau Down vol. 2, Philippine News), as well as featured in multiple art exhibitions including the acclaimed “Wonderland” in 2009 where he collaborated on the exhibit “Down the Rabbit Hole”.

He is the founder of Studio Caricart, a Caricature Studio with the purpose of showing Christ’s love to people.

He is currently studying ministry at Liberty Church.