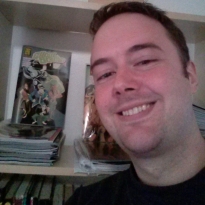 I was born in the town of Goderich in the Canadian province of Ontario, but I grew up in a small town in Alberta called Wetaskiwin, which is about a half-hour south of Edmonton.

I’ve been writing stories since as long as I can remember. When I was really young, it must have been around grade 1, I used to write these paragraph-long Star Wars stories that, at the time, I thought were the coolest stories in the world.

One time I managed to fill an entire page of paper with a Star Wars story and, in my mind, that was the biggest milestone of my life up to that point. I remember running into the kitchen to tell my parents what I’d achieved. They didn’t seem to share my excitement.

The morning after having the dream I was in class at school. The dream was so vivid in my mind that I thought it would make a cool story. I took out some paper and began writing. I stood my textbook up on my desk to block the teacher’s view of what I was doing. Whenever she’d walk by I’d tuck the papers under my binder and pretend I was doing my work.

I finished the story later that night. It was five pages long, if I remember correctly. I was really pleased with the results. Technically, I was the main character in the story, but instead of using my own name I created a character whose name was mine spelled backwards — Nodnarb Ssenihr.

The following day at school, in English class, I asked our teacher if I could read the story to the class. She allowed me to.

Even though I was really nervous, I read the story in front of the class. When I was finished the whole class erupted in applause and cheers. This gave me an incredible rush. It was a feeling that still resonates with me today.

When the bell went for recess a group of boys from the class came up to me and told me how great the story was. They said I should write a “part 2” to the story. Then they began discussing all the cool stuff that could happen in the sequel.

Due to the huge “success” of Nodnard Part 1, I wrote a couple of sequels which were also well received.

I didn’t grow up with comic books like a lot of people did. I didn’t get into comic books until I was in grade 5. And I didn’t gradually get into them either. It all came down to one moment.

It was science class and the teacher was at the front of the class demonstrating a science experiment using a metal ball and a metal ring to show the effects of heat on metal.

The students were seated at these long tables with three kids to a table. I saw the two kids next to me looking at something underneath the table, out of view of the teacher. I told them to show me what they had. They were Marvel Comics trading cards.

At this time I knew who the most famous comic book characters were, Batman, Superman, Spider-man etc., but that was the extent of my knowledge. When the kids showed me the Marvel cards my first thought was, “this is the coolest thing ever!” I remember the first one I looked at was Iron Man.

At this moment something clicked and I immediately wanted to be part of the world of comic books. I went home and started telling my parents all about how cool comic books were.

I began spending my allowance money on Marvel trading cards. I quickly became familiar with all the characters.

One day, on a trip to West Edmonton Mall, my dad took my brother and I into the comic store. If I’d brought a sleeping bag I would have spent the night there. It was so cool. My dad said he’d buy us each one comic book.

I chose Punisher #47, and my brother chose an issue of Iron Man. From that day on I’ve bought virtually every Punisher comic that came out. And it’s been nearly 25 years.

After collecting comics for a year or so I decided to set my mind on being a comic book artist. So did most of the other boys in the class, now that I think about it. I would make up and draw my own comics. Most were between one and five pages. And I’ll admit that most of them were pretty crappy.

One incident stands out in my mind. It was in grade 6. The class was being disruptive or misbehaving in some way and our teacher was sitting on a stool at the front of the class giving us a lecture. I remember this teacher being quite strict. In fact, he was downright mean.

Once again, I had my textbook up to hide what I was doing from the teacher. (All my best memories from school seem to involve not paying attention in class.) Using the teacher sitting on the stool at the front of the class as a model, I drew a one-page comic where Wolverine came into the class and told the teacher to shut up. In the comic, the teacher said, “Pardon me, but I’m trying to give my class a lecture.” Then Wolverine said, “Too bad, bub.”

Wolverine proceeded to slice the teacher’s head off with his claws. There was blood spraying out of his neck and a spinal cord dangling from his neck. After finishing this mini-comic I sat there smirking at the cleverness of my work.

Of course, like any normal kid, my first thought was to show this to someone. I discreetly poked the kid ahead of me with my pencil to get his attention and I handed him the piece of paper with the comic on it. He turned around and gave me a smile. He liked it.

Of course the kid sitting across from us saw what we were doing and asked to see it. The kid in front of me handed the page to the kid across the aisle. Of course the teacher saw it.

“What is that? Give it to me.” the teacher said. I couldn’t see my own face but I’m sure it was white as a ghost. It didn’t help that the kid in front of me said, “Brandon made it.”

The teacher stared at the page for a moment while I was trying to figure out what I was going to tell my parents when I got sent home from school.

The teacher looked at me and said, “You made this, Brandon?” I nodded. He said, “It’s very good.” Then he gave it back to me and class carried on as usual.

I eventually gave up on trying to draw comics, because…well, because I sucked. But I started creating my own characters and basically forming my own little comic “universe.”

In high school I became interested in making movies so everything I wrote from then on was in the form of a screenplay.

I worked on some short film sets and even wrote, directed, and edited some short films either on my own or with friends. None of them were very good.

I eventually met Adam Storoschuk through a mutual friend and we lived in a house together in Bonnyville, AB with a few other people. Adam was also into comics and we shared the same interests in comics, movies and music.

Adam and I were sitting on all these great stories but we really didn’t know what to do with them. One day I finally decided to just dive in headfirst and turn both Misfits and Stargirl into comics.

I didn’t even know how to get a comic made, so I learned as I went. I hired artists and turned the screenplay episodes into comic book scripts. Adam and I paid every cent it took to create the comics out of our own pockets. No investors, no crowd-funding, no nothing. This was no easy feat, but we did it.

It took over a year to finish Misfits #1 and Stargirl #1 but they did get finished. And now they are available for the world to see.

Since then, everything we’re doing has just grown into something great. We’ve started producing other titles and we have a great team of artists and writers working with us.

And every time someone tells me how much they like one of my stories I still get that same feeling I did way back in grade 4.

Thank you to each and every person that reads my stories!