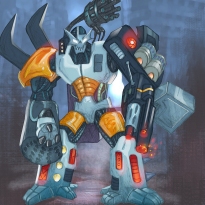 In late 1944, during the final days of World War II Adolf Hitler was searching for a way to stop the allies from advancing into Germany.

He contacted the eccentric German scientist Professor Von Lederhosen who was known for his robotic inventions of his research of artificial intelligence technology.

Hitler went to visit Von Lederhosen and his assistant, Bruno, at their castle in the Bavarian region of Germany.

Hitler commissioned Von Lederhosen to build the ultimate super-weapon—a war machine with heavy firepower that was nearly indestructible and that would not only obey commands but that could also think on its own.

Hitler was surprised to find out that Von Lederhosen had already created a prototype robot that was exactly what Hitler was looking for. The machine was called “Blitzkrieg”. The only problem was that the Professor was having difficulty with the AI programming. He felt he was close to getting the machine functional but he needed more time.

Hitler launched what was to turn out to be the final German offensive of the war, the Battle of the Bulge in December of 1944 in an effort to stall the allies and give Von Lederhosen a chance to get Blitzkrieg up and running.

The offensive lasted until the end of January 1945. By that time the Professor had created a primitive computer program that, given enough time, would become self-aware.

However the allies eventually won the Battle of the Bulge and continued their advance on Germany. Professor Von Lederhosen’s castle was destroyed during a British bombing raid, burying Blitzkrieg underground under a pile of rubble.

After Hitler’s suicide and the allied victory in Europe, the castle rubble was searched but there was no sign of Von Lederhosen or Bruno. They have not been seen since.

And since no one knew of Blitzkrieg’s existence, he remained underground; his AI program replicating itself until the day he will become self-aware.