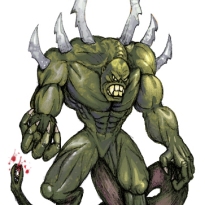 Base of Operations Colorado Rocky Mountains

Little is known about Battlesnake. He lives in the Rocky Mountains in Colorado near an isolated colony of religious fanatics who have no contact with the outside world. They named their town Yahweh.

Battlesnake was given his name by the children of Yahweh. According to the townspeople Battlesnake, as well as the other creatures from his race, has been a constant menace that comes into their town and steals food and murders people who are out alone late at night.

However, according to Battlesnake he is the last of his race that only want to be left alone but have been hunted into extinction by the townspeople. It is unclear who is telling the truth.