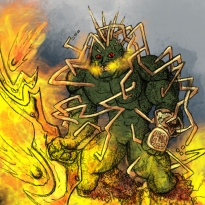 Barbarror is a member of a race of warrior people who live on an asteroid. The asteroid travels through space and Barbarror’s people attack and pillage any civilizations they come across. Barbarror’s race of people does not have a name for themselves. They also do not have names for each individual.

Barbarror was charged and tried for murder on the asteroid. His punishment was to be exiled.

Barbarror now travels the galaxy on his own doing as he pleases. He has conquered worlds on his own and is responsible for much grief and devastation.

Barbarror was fascinated by the fact that nearly every other race of beings had names for each individual in the race. It is unknown how Barbarror acquired his name.

It is not known how long Barbarror’s people live but he has been alive for thousands of years. His lifetime goal is to find his home asteroid, wherever it may be in the universe, and get revenge on those who exiled him.