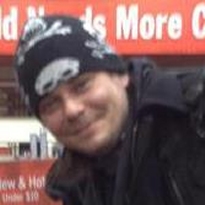 I was born and raised in a small town in rural Alberta, Canada. Vegreville to be precise.

Being in the middle of nowhere left me bored and with a wild imagination. For as long as I can remember there were always comic books around. Not just superhero comics, but horror, war, and yes, even Archie comics.

I would lose myself for hours reading and re-reading them. It eventually inspired me to pick up a pencil (or pencil crayon) and start drawing not only the heroes and monsters I found so appealing, but also my own creations. This is something I still enjoy to this day.

There is one other factor early in my development that influenced me greatly. It was music. Specifically, the band Kiss. It may seem ridiculous nowadays, but it was them that led me to pursue the sound of heavy music.

After graduating from high school, I moved to Edmonton and got into a career cooking. My love of comics never diminished.

As years passed, I developed many characters and concepts but I did not know what to do with them. Writing certainly was not my forte. The talent of coming up with beginnings, middles and ends to stories always eluded me.

It wasn’t until my adult years that circumstances changed. In the early 2000s I moved to Bonnyville, Alberta, another small town. It was there that I met Brandon Rhiness. We became roommates after I moved in with a mutual friend.

I soon discovered that Brandon was a writer who also liked comic books. Thus, the seeds were planted. After showing him a bunch of the characters I had created and drawn, Brandon took a liking to them and started writing. He not only made stories, he created personalities for them as well.

After moving back to Edmonton we decided that we were pretty good at this and we should try to get our stories out into the world. Brandon came up with the name The Higher Universe, and the rest is history.